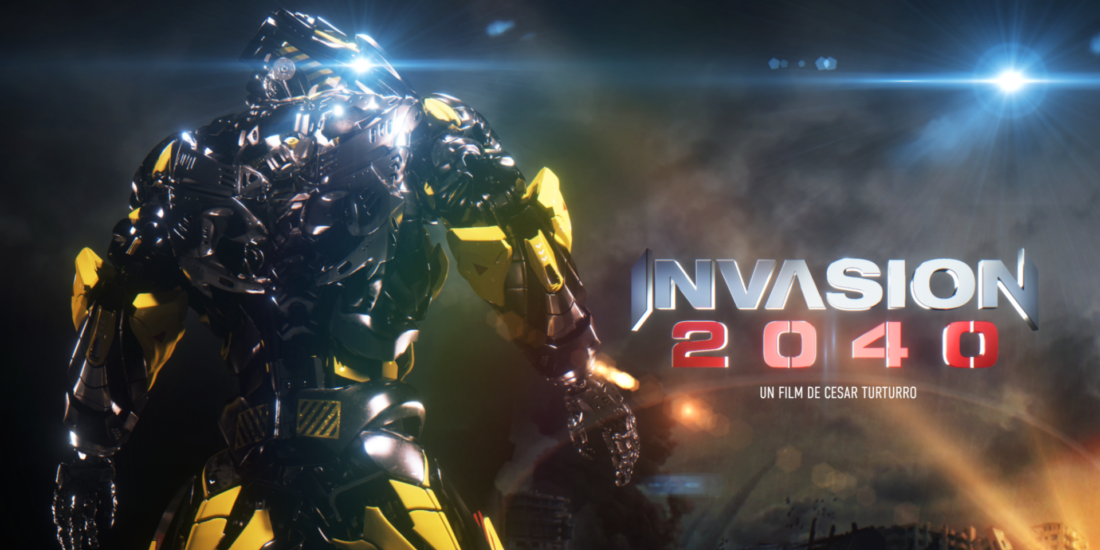 The year is 1982. High up in the Atlantic skies, two Argentine A4C Skyhawks intercept and harass two British Sea Harrier FRS1’s that were serving as the British Royal Navy’s eyes. But in a spectacular feat of aerial maneuver, the Harriers execute a turn that put them behind the Skyhawks instead. The prey becomes the predator. Meanwhile down below, three Argentine M-5 Daggers, each carrying 250-kilo bombs, fly low, almost kissing the dark swirling waters of the Atlantic, to avoid radar detection and get close enough to the British fleet and rain down fiery destruction…

This is a scene from one of the most important documentaries about the aviation industry produced in Latin America by the History Channel called Malvinas: La Guerra Desde El Aire. Not a single video camera was anywhere near the site of the 1982 Falklands War between Argentina and the UK, but armed with a wealth of film directing experience, and first hand interviews, Cesar Turturro or “Ceturtu” implemented his most powerful tool – his imagination – to bring to life a critical moment in modern world history that would otherwise be only remembered by the pilots and sailors that took part in them.

But you might say, “Hey, this isn’t world building. How can you say that Ceturtu is a world builder? World building is Star Wars, or Lord of the Rings, or Game of Thrones.”

Well dear reader, you are right. Ceturtu’s work with History Channel isn’t world building. Not yet. You see, his work with the History Channel gave him the skills he needed and the time to mature in order to create his masterpiece – Invasion 2040, a post-apocalyptic science fiction series where the Earth is invaded by extraterrestrials and the hope of humanity lies in AI androids. And that dear reader is definitely world building.

But that’s getting ahead of the story.

Speaking of post-apocalyptic, Ceturtu’s earlier work for the Latin American version of History Channel’s Life After People, may be closer to the themes he, later on, develops in Invasion 2040. Back in 2008, this series imagined and visualized what could happen to our cities, buildings, and other structures if humans were to disappear off the face of the Earth. The documentaries feature interviews with physicists and engineers who trace the sequence of civilization’s decay, from the first day the Earth becomes human-free up to 10,000 years after we’re gone.

However, what made Life After People one of the most watched shows on History Channel were the visualizations that Ceturtu helped create. From grass overtaking Argentinian roads to wild vegetation reclaiming Peruvian buildings to the crashing of the Redentor Christ in Brazil, the Buenos Aires Obelisco and other landmarks of Latin America after centuries of disrepair, Ceturtu’s 3D renderings of things that have never happened (or is soon to come! Hello, global warming) kept people intrigued episode after episode.

That kind of covers Ceturtu’s first encounter with the post-apocalyptic. Contacto Extraterrestre, another History Channel mini-series in 2013, introduced him to the possibility of extraterrestrial presence on Earth across history. And it tantalized him. The show investigated the most relevant UFO cases and sightings, interviewing experts and eyewitnesses in search of answers to the ultimate question of whether we are alone in the universe. Ceturtu supervised the VFX production for the show, leading him to imagine what extraterrestrial biology and interstellar travel-worthy spacecraft could be like.

Birth of his masterpiece

All these experiences converge and culminate in Ceturtu’s latest and soon-to-be-released (as of writing) work, Invasion 2040. If the multi award-winning prequel to it – Genesys One – is any indication, Invasion 2040 looks to be amazing alchemy of live action filmmaking, storytelling, world-building, and visual effects. Take a look at Genesys One for yourself.

If that didn’t excite you enough, here’s the trailer for Invasion 2040. It’s like Transformers meets the Last of Us.

The work behind the magic

Even for just a trailer like that, you can’t pull that off without being deep in film and 3D craft. Ceturtu has 20 combined years of working behind the camera and in front of a computer. He formed his own studio, CreaVision, in 2001 and started getting more involved in the 3D industry in 2011. His history with the History Channel Latin America gave him the opportunity to master rigging, texturing, animation, and rendering.

And for a project as complex as Invasion 2040 and Genesys One, even a master like Ceturtu needed help. He turned to Xesktop. If you’ve watched the links above, you’d see how much detail goes into every frame, detail that would take really long to render without the help of a GPU rental service. Here’s how Ceturtu tells it:

“I sent some complex scenes where there was a lot of noise or volumetric stuff on it. Some characters in Invasion have a lot of reflections and detail. Or in other scenes, there are a lot of objects in huge scenarios. The aircraft must fly over thousands of meters. So you need it all over the scene. It’s impossible with my own GPU to get a very realistic and high quality scene with lots of volumetric cloud. All of it was rendered in a short time with Xesktop. Very practical.”

And as any 3D artist would know by experience, a lot of issues can crop up during rendering. Especially when you’re dealing with a huge number of frames. That’s why for Ceturtu, Xesktop’s real-time support was crucial:

“The good communication and the easy-to-use app were perfect. I got to send and receive the material with no problems. All issues were solved by the staff. Good compatibility with my software, good communication, good price… this is why I always recommend Xesktop.”

Ceturtu looks forward to new developments in 3D to inject more realism into his imagined worlds. Some of the new technology that can help him in his work are:

“Scanned models, high quality humans with realistic expressions–these will make a huge change in the filmmaking industry, allowing small productions to make very high quality scenes, where it would be impossible to do in real life (stunts, extras actors, film equipment, etc.)”

And for him, the future definitely includes GPU rendering:

“Today, big GPUs allow us to make the biggest simulation particles, realistic rendering, huge scenes, with a lot of models, trillions of polygons, you can illuminate, animate, watch in real time how your scene will look. This is priceless.”

There you have it. Watch out for the release of Ceturtu’s Invasion 2040. If you want to learn more about him and his work, click here.

Find out more about Xesktop and how it can help you in your 3D projects here.